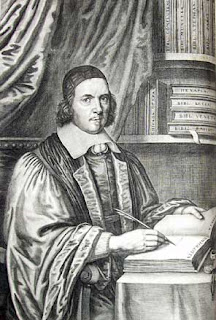 Every now and again, there is a relatively obscure figure in history who deserves to have his 15 minutes of fame. Given our discussion a few weeks ago, where we looked at the number of TR editions published between Erasmus and the Elzevir, it seemed appropriate to feature our friend Brian Walton.

The first work to systematically collect variant readings of the Greek New Testament was the London Polyglot Bible (1655-1657) by Brian Walton (1600-1661). The work contained Robert Estenne’s Greek text from the 1550 edition (better known as Stephanus’s Greek text) and recorded at the bottom of the page variant readings from Codex Alexandrinus. Eldon Epp explains: “[Codex] Alexandrinus, which had come to light in 1627, was assigned the symbol ‘A’ by Walton and was a major factor in the now increasing activity of collecting variant readings and displaying them in critical editions of the Textus Receptus.” In the sixth volume Walton inserted an appendix prepared by Archbishop Ussher of variant readings from fifteen different sources. (Wegner 210-211)

A couple of observations:

1. Walton was using the Stephanus text, which we observed earlier is one of the 23 (though practically more like 14) editions of the Received Text published between 1516 and 1678. Technically, Walton’s edition brings that number 24.

2. Walton produced a critical edition of the Stephanus “Recieved Text” comparing it to an Alexandrian text manuscript (Codex Alexandrinus [A]).

3. One of Walton’s contributors included Archbishop James Ussher (of “Annals of the World” fame).

Wallace: There Are 1,838 Differences Between Textus Receptus and the Majority Text

Should We Back Off The Papyri?